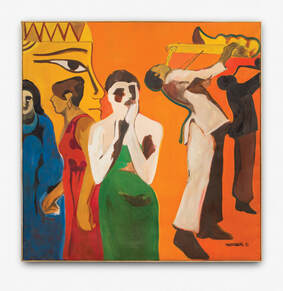 Woodson was born in Pulaski, Tennessee in 1936. When she was 3 months old her family moved to Detroit. She studied art in elementary and high school. She received a BFA in 1958 and teaching certificate in 1960 from Wayne State University. She did graduate work at the School of the Art Institute of Chicago and met artist Richard Hunt. She also taught for Detroit Public Schools from 1958-1965. She completed a residency at MacDowell Art Colony in 1966 and then joined the faculty at Highland Park Community College. In the late 1950s or early 1960s she joined the Arts Extended Group, an organization of artists and educators that opened a gallery which later became the Charles H. Wright Museum of African American History. Woodson was gallery curator from 1965-1972 and regularly exhibited there.

In the late 1960s Woodson created 25 collages included in an exhibition with poetry texts by Dudley Randall. Randall founded Broadside Press which became a major force in the Black Arts Movement according to his biographer Melba Joyce Boyd. Randall and Woodson worked together illustrating book covers and broadsides for the press.

Woodson became part of McGees Gallery 7 and exhibited there. She was active in the Black Arts Movement. She and her husband Edsel Reid were invited to participate in the 1970 Conference on the Functional Aspects of Black Art at Northwestern University. She was also one of the founders of the Michigan Chapter of the National Conference of Artists (NCA), an African-American art organization whose members work in a representational style. She attended and showed her work at FESTAC ’77 the Second World Black and African Festival of Arts and Culture in Lagos, Nigeria.

She stated that from 1979-1980 she was Director of Pyramid Gallery where she organized an exhibition on the “Black experience.” Works by Harold Neal, Henri King, Jon Lockard, Carl Owens, Arthur Roland and others were exhibited. She is still very active in producing and showing her art and represent by numerous museum collections. She currently is featured in a one-person exhibition at the Detroit Institute of Art titled: Shirley Woodson: Shield of the Nile Reflections on display from December 18, 2021 to June 12, 2022. https://www.dia.org/woodson
​
Shirley Woodson Monograph by Kresge Foundation, downlable PDF : https://kresge.org/wp-content/uploads/Woodson_Final_Spreads_72dpi.pdf