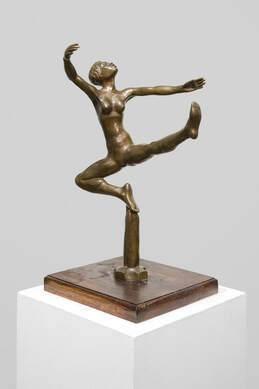 LaGrone was born in Oklahoma in 1906. He learned about African American history from his father who had a normal school education and was a preacher. He attended Howard University in 1928-29 and was introduced to labor issues. He wasn’t able to complete his studies at Howard University due to the depression and moved to Albuquerque. He won a sculpture competition by the Works Progress Administration. The sculpture is located at the University of New Mexico Hospital in Albuquerque. He graduated from the University of New Mexico and studied with William Emmett Burke.

He moved to Detroit in 1941, received a scholarship and became the first Black artist to study at Cranbrook Academy under Carl Milles. In the early 1940s he worked at the Ford Motor Company and became active in the United Auto Workers (UAW) with Lee-Smith. LaGrone worked in the UAW Film Division.

In the 1950s, as many people in the arts and labor movements were accused of being Communists, he was asked to denounce Communist Party members.

He found work such as a substitute teacher for Detroit Public Schools and attended Wayne State University, getting his teaching certification in Special Education and Art. He then taught full time at Detroit Public Schools and African American history in high school. He wrote poetry and made art. He exhibited his work at the Werbe Gallery.
​
He travelled to Togo, Ghana and Dahomey and was influenced by Benin Empire bronze sculptures which inspired him to create a number of artworks. His work traveled to venues and impressed faculty at Pennsylvania State University in Harrisburg who then hired him in 1970. He taught art, humanities, and African American history at the 22 campus locations. He continued to teach art and lecture then eventually returned to Detroit in 1992.