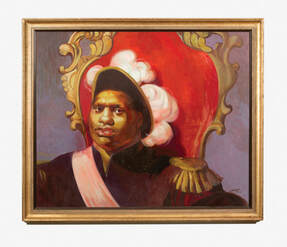 Foster was born in Detroit in 1925. He graduated from Cass Technical School in 1942 and received an afterschool scholarship at Society of Arts and Crafts in Detroit in which he studied under Sarkisian.
He received a scholarship to study in Europe in 1948 and revisited there in 1954 and 1956-57. While in Europe he studied at the Académie de la Grande Chaumiere in Paris and the Heatherly School of Fine Art in London and Italy. He stated that he learned more in the Louvre than any art school.

He was a member of and taught at the Pen and Palette Club, an organization of Black artists sponsored by the Urban League. He was a founding member of Contemporary Studio serving as its gallery director and regularly exhibiting there. He also taught at Joan Lockard’s Studio 21, American Black Artists, Inc. and Detroit’s George Elementary School. He was an artist in residence at the International Afro-American Museum, now the Charles H. Wright Museum of African American History.
He made a living selling his art, especially portraits and with teaching positions.
Along with his paintings, he also created murals. His imagery and themes portrayed heroic father figures, a phoenix bird reborn from fire’s ashes, semi-nude Black youths, actor and peace civil rights activist Paul Robeson and Frederick Douglas as a semi-nude young man breaking the chains of slavery.
​
His artwork is represented in the collection of the Charles H. Wright Museum of African American History.