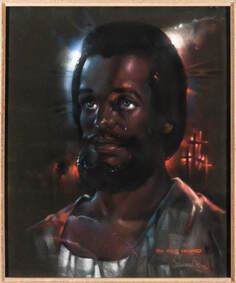 Lockard was born in Detroit in 1932. As a teen he apprenticed with a sign painter who helped him later in life with mural projects. He took classes at the Pen and Palette Club. He studied at Wayne State University graduating in 1955. He also studied also at Meinzinger Foundation Art School. At WSU he was told by a faculty member to not paint black people if he wanted to make it in the art world.

He became an itinerant portrait painter at trade shows and fairs in the 50s and 60s. He took a middle name of “Onye” as it means traveler in a Nigerian language. He opened Studio 21 an art store, studio and gallery in Detroit. Eventually he moved his studio to Ann Arbor in 1965.

He became involved with Black Nationalists in the mid 1960s. He felt fine arts can be produced for the masses and he devoted his energy to this thought. His style was realistic, and he said his art should be readable by laymen as well as art connoisseurs. He created inexpensive reproductions of his work which made it affordable to a wide audience.
​
In 1968 he joined with Black Students Union at Washtenaw Community College to demand the formation of a Black Studies department in which he also taught at starting in 1969. In 1970 he founded the Center for Afroamerican and African Studies at the University of Michigan. He taught over 40 years at these institutions. He was heavily invested in the heritage of Black Americans and created murals on this topic. In 2010, he had a retrospective exhibition at the University of Michigan called Africentricity. He also served as an art advisor for the Dr. Martin Luther King Jr. Memorial in Washington, DC.