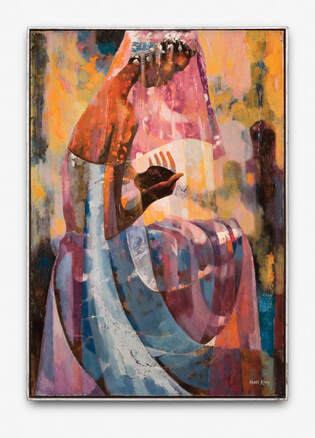 King was born in Detroit in 1923. He attended Cass Technical High School and afterwards studied the Society of Arts and Crafts (SAC) from 1947-48. He was president and taught at the Pen and Palette Club.

He founded the Contemporary Studio with Charles McGee, Ernest Hardman and Harold Neal in 1958, serving as director for 2 years and was a driving force of this gallery.

In 1960 he became very active in radical politics in Detroit. Along with other artists, he founded the Malcolm X Society, a semi-secret organization which led to the Republic of New Afrika.

King’s work was of the Black Arts Movement as indicated by his art statement:

“My works are concerned with the revival, survival and immortalization of Black and African greatness through depictions of those images, life styles, struggles and genius which for centuries have been ignored, lost or stolen…I am concerned with the images/statements that portray Black and African DEFINITIONS of aesthetic beauty…rather than those DEFINITIONS suffered upon us by non-black aesthetics.”

He traveled to Dakar, Nigeria, Accra, Ghana and adopted the middle name “Umbaji” which means creative in Swahili.

He exhibited in Buffalo, NY, Central Michigan University, Kent State University, Ohio and organized many exhibitions and gave public presentations. He served on the Detroit Institute of Art’s African Art Gallery committee and acquiring art for it.
​
After retirement, King moved to Jamaica where he continued to teach and make art.