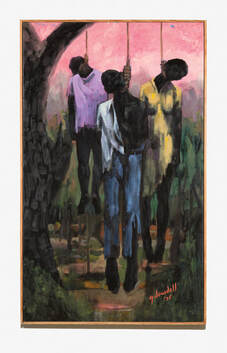 ​Dowdell was born in Detroit in 1924. His grandmother, a portrait painter, instructed him in art. He only completed 5th grade and was in reform school for robbery. He visited other parts of the United States, Mexico and Cuba and then studied at the Art Institute of Chicago, paying his tuition by painting portraits. He returned to Detroit and attended the Society of Arts and Crafts. He served in prison for a crime, created art there and taught other prisoners. He won an honorable mention award for his painting titled Southwest Corner of my Cell from the Detroit Institute of Art in the 1955. He then received a one-man show at Detroit’s Grand River Gallery in 1958.
​
After his 1962 parole he became active in the African American art scene and a leader in militant Black circles in Detroit. He was associated with radical Black politics and focused his art activities to African American community. In 1966 he opened the Easel Gallery and stated, “in the heart of the ghetto, so Black artists can sell their work here, not have to pander to the tastes of Birmingham and Grosse Pointe people.” Unfortunately, the gallery was destroyed by police, who also shot Dowdell several times.

In the mid-1960s he painted an eighteen by nine feet image of a Black Madonna and Child. This work would influence local and national artists.

Due to threats on his life he moved to Sweden for the rest of his life. His artwork is represented in the Charles H. Wright Museum of African American History.