Ford Rotunda
In 1952 Fredericks stated in a letter to the Walter B. Ford Designers Corporation in Detroit, a proposal to create 32 sculptured panels for the interior of the inner court of the modern-designed Ford Rotunda Building in Dearborn. They were to be castings made in a weatherproof material and assembled in place [for a cost of $40,000]. The Ford Rotunda was expected to open in May 1, 1953.

According to a Ford Motor Company bill of lading dated August 19, 1952, Fredericks is to “furnish all the necessary labor and materials required to design, create, execute and install sixteen (16) sculptured bas relief murals, cast in hydrocal plaster and finished in aluminum metallic paint for the Buyer’s [Ford Motor Company] Rotunda Building, located at Dearborn, Michigan” on or before May 1, 1953.
​
Fredericks’s 16 reliefs were made in fiberglass polyester resin laminate. 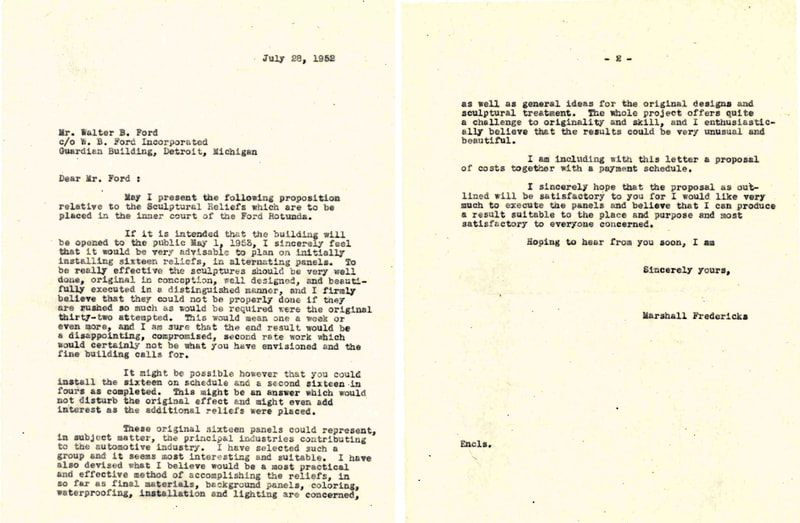 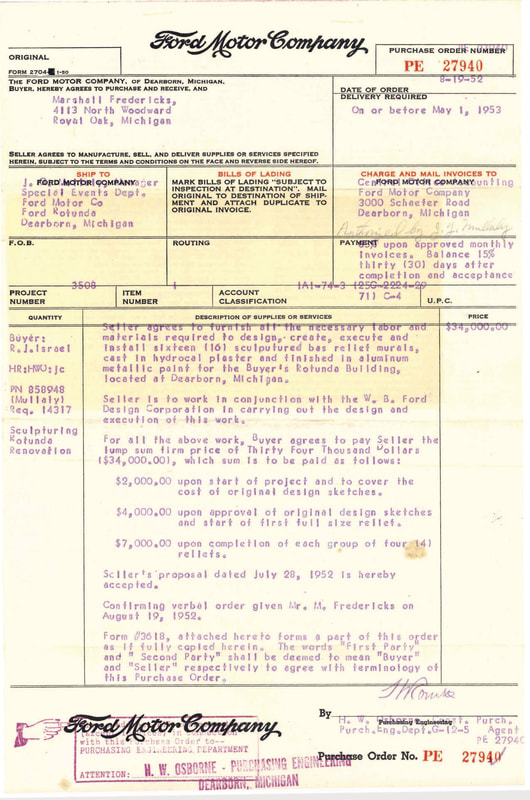 In a 1952 letter from Fredericks to Walter B. Ford, Fredericks states:
“These sixteen panels could represent, in subject matter, the principal industries contributing to the automotive industry. I have selected such a group and it seems most interesting and suitable. I have also devised what I believe would be a most practical and effective method of accomplishing the reliefs, in so far as final materials, background panels, coloring, waterproof, installation and lighting are concerned, as well as general ideas for the original designs and sculptural treatment. The whole project offers quite a challenge to originality and skill, and I enthusiastically believe that the results could be very unusual and beautiful.” In closing of this letter he states “…I can produce a result suitable to the place and purpose and most satisfactory to everyone concerned.”
Fredericks’s sixteen cast fiberglass polyester resin laminate reliefs were installed in the modern-designed Ford Rotunda in 1953. In 1956, The Architectural League of New York awarded him the Gold Medal in Sculpture for the bas-reliefs at the Ford Rotunda in Dearborn, Michigan and at the Beaumont Hospital in Royal Oak.
​
In 1962 this building was destroyed by fire including all of Fredericks’s relief sculptures. Only photographs of these reliefs survive.

A SHort History of the Ford Rotunda