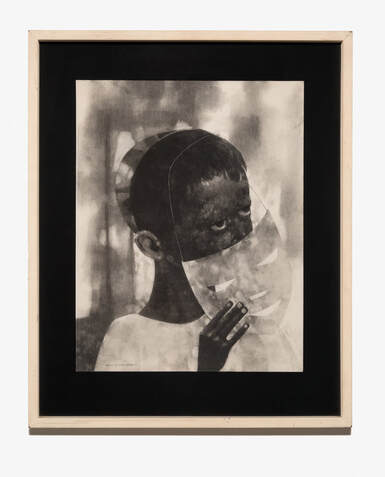 McGee was born in Clemson, SC in 1924 and moved to Detroit in 1924. He took classes at the public library and Detroit Institute of Arts. Forced to end schooling due to his mother’s death, he worked in the foundry at Detroit Hardware. He later served in the Marines from 1943-47 and saw the Pacific and aftermath of the bombing of Nagasaki.

After the war, he worked in the Detroit auto industry and then as a cartographic and statistical draftsman. He studied at the Society of Arts and Crafts on the GI Bill from 1947 to late 1950s and met other Black artists especially of the Black Arts Movement. He was greatly influenced by Sarkis Sarkisian and Guy Palazzola and the technique of using the “undertone” style of layering of flat, translucent shapes in paintings. Some of his work relates to Lee-Smith’s “loneliness of spirit”.

His early work incorporated African design, stylistic elements and subjects. Later on, he developed an more painterly style like de Kooning. He developed a highly abstract style which featured fractured forms of Picasso and biomorphic shapes of Miro. In the 1970s, his work became assemblages using architectural elements from African American neighborhoods cleared for highways.
​
He participated in Negro History exhibitions and regularly at Detroit Artist Market, Detroit Institute of Art and represented by the Arwin Gallery.

He was invited to curate an exhibition of African American artists for the Detroit Artists Market in 1968. The resulting successful exhibition that opened in 1969, was titled Seven Black Artists featuring non-objective or highly abstracted artworks. He opened a gallery called Gallery 7 which operated from 1969-1978. Because of his successful curated exhibition, he was asked to become faculty at Eastern Michigan University Art Department, teaching there until 1987.

His artwork’s message is about equality and interconnectedness of all beings of the universe as a whole. His 2018 sculpture called United We Stand is on the grounds at the Charles H. Wright Museum of African American History. The sculpture expresses the concept that although each living being is different, when united, we can stand strong.