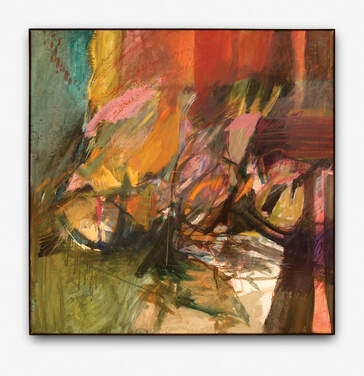 McGhee was born in Charleston, West Virginia. After he completed 5th grade his family moved to Detroit and he attended Cass Technical High School for commercial art graduating in 1959. While at Cass he was discouraged by a teacher who said there wasn’t a future for African Americans in commercial art. He attended Ferris State University receiving an associate degree in commercial art. In 1961 he attended Eastern Michigan University in fine arts and studied with John Pappas, Richard Fairfield and Kingsley Calkins. In 1965, he was encouraged to set up a studio and he did. At this time, he was painting portraits, images of African Americans and Renoir-style white nudes.

McGhee was influenced by urban violence and the Black Power movement of the late 1960s. At the time, his work addressed contemporary violence referring to the Vietnam War and African American uprisings. Along with Aaron Ibn Pori Pitts’s friendship he met Charles McGee and Harold Neal in the early 1960s and they had nearby studios. He also showed in McGee’s Gallery 7 plus taught at Charles McGee School of Art.

In the 1970s McGhee stopped producing political art because he said it was “painful and taxing to be involved in social rage.” He wanted to find “something more eternal” and emphasize “how many things humans have in common rather than their conflicts.” His work became inspired by Egyptian and Sub-Saharan African art. He used symbols in Non-Western art and his own personal symbols and abstraction in style.
​
He has produced public commissions such as murals, mosaics and has had one-person exhibitions. He is still productive today.
https://cranbrookartmuseum.org/exhibition/allie-mcghee-banana-moon-horn/  Allie McGhee: Banana Moon Horn Oct 30, 2021 to March 20, 2022