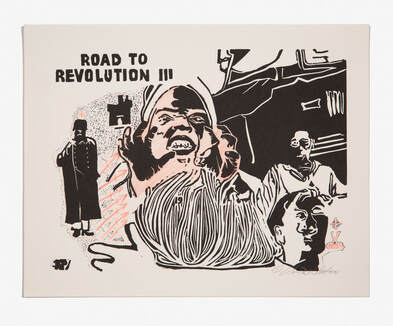 Pori Pitts was born in 1941 and attended Cass Technical High School. After graduation from high school he moved to Los Angeles in 1960 and studied at the Otis Art Institute from 1962-1966. He became active in the African American art community after the 1965 Watts uprising. During Pitts time at the Otis Art Institute he studied with African American artist Charles White, a leading force of LA’s Black art community. Other possible influential artists at Otis were David Hammons and Noah Purifoy who explored political prints, collage and assemblage.

In 1965-67 he was set designer and fine arts director at the Performing Art Society of Los Angeles (PASLA), an all African American theater company that followed a Black nationalist philosophy. This organization encouraged members to take African names and he adopted “Ibn Pori.”

He exhibited frequently in LA including the Watts Festival which according to Now Dig This and Black Arts West texts plus Pott’s resume, “celebrated Los Angeles cultural diversity and the ideal of a black cultural renaissance emerging from the ashes of the uprising.”

Right before he left California in 1967 to return to Detroit he joined the Black Panthers. Back in Detroit he worked at Chrysler and became a member of the Dodge Revolutionary Union Movement (DRUM) and Later the League of Revolutionary Black Workers (LRBW) in which he designed newsletters and posters. From 1968-1976 he edited, published and contributed to Black Graphics International (BGI), a revolutionary journal which featured art by radical Black artists. In 1966 his work was included in a traveling exhibition in the U.S.S.R. and Eastern Europe sponsored by Institute of Soviet-American Relations, per his resume.

Pori Pitts was a Black Nationalist. In 1980 he said, “All of my work deals with Black Nationalism, in my artwork I try to act as an agitator and propagandist for the Black Nationalist struggle.” His work is produced for a Black audience. According to Charles McGee, he wouldn’t do an interview with the Detroit News because it was a white newspaper. Additionally, Robert Doty, curator of the Whitney Museum of American Art, wanted to include one of his works in the 1971 exhibition Contemporary Black Artists in America but refused because he considered the museum to be a white institution.

In 1970 along with Shirley Woodson and Jon Onye Lockard attended the Conference on the Functional Aspects of Black Art at Northwest University which brought together Black Arts Movement artists from around the country. Pori Pitts and Woodson founded the Michigan chapter of the National Conference of Artists, whose mission according to Woodson is to “support African American culture through the visual arts.”
​
Pori Pitts was represented by Charles McGee’s Gallery 7. In 1978 he graduated from Wayne State University with a BFA in printmaking and communications. His work at this time was found object installations; he also wrote poetry. He remained very active in the Detroit art world and explored video, site-specific sculpture, performance, public murals and music. He’s known for transforming junk cars into shrines to deceased persons and African American revolutionary leaders, jazz musicians and artists. One shrine honors Harold Neal.